The Tellus Programme in Geological Survey Ireland is pleased to release the latest data from the ongoing airborne geophysical survey along with a series of photographic highlights taken by the survey pilots capturing the amazing Irish landscape.

The Tellus survey is a national mapping programme, and the data collected provides important information to the agricultural, mineral and environmental sectors. In 2019 airborne surveying was completed over the southeast of Ireland crossing the skies over Counties Wexford, Carlow, and Wicklow, and parts of Kilkenny, Kildare and Waterford. These new data map over 600 million years of complicated and varied geology; from traces of long lost continents, dramatic volcanic arcs and the massive granite intrusions which still dominate the landscape today.

Previously released electromagnetic data from the Limerick region have been re-worked using newly developed software allowing detailed vertical sections of varying resistivity values to be imaged down to a depth of 60 m along each flight line. These show differences in the soil and rock properties below the surface allowing a better understanding of the geology of the region.

Since the start of the Tellus survey in Ireland in 2011, the survey pilots have been taking photographs from their unrivalled vantage point of the stunning landscape below them. The Tellus team has collated these images along with facts from the localities and digitally mapped them to provide a ‘Tales from Tellus’ ESRI storymap which shows the varied landscape of Ireland. While the survey collects geochemical and geophysical data that can image the deep geological features beneath our feet, these photographs show the human story of the survey and the dramatic coastlines, hills, fields and people who make up this island.  The storymap can be viewed here.

“We are delighted to release further geophysical data collected by the Tellus aircraft and in particular the new EM inversion dataset providing further value added products from the data which will be of use to people engaged in construction, mineral exploration and environmental management. Releasing the new data at the annual Irish Geological Research Meeting, held this year in Athlone and hosted by GSI, among the young geoscientists who will be using this information for years to come is most appropriate. We look forward to the next phase of the Tellus survey over the counties of Kilkenny, Laois and Tipperary which will take to the skies this summer”.

Tellus is funded by the Department of Communications, Climate Action and Environment. All data are made freely available to the public and data and maps are available to view and download from www.gsi.ie/tellus. 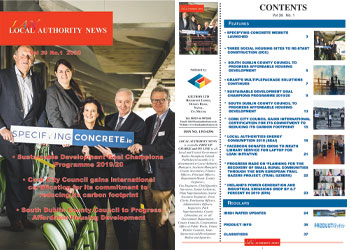